I am not a salesman… we have a lovely house here, and we are looking for the right people to move in and enjoy this house the way Mom and Dad did.
A picture is below.

This is a lovely house, and ready for a couple who wish to retire in Lake City, Florida.
We are looking for a nice couple who will love this house as much as we do… We will work with you in making this the home you will enjoy.

PERSONALLY REDUCED SPECIAL Web Site PRICE: $100,000.00
If you are interested in Renting or Leasing this house… we are looking into this, and would like to hear from you.

For more information and appointment contact: Jack Exum Jr.,
at 386-758-2431 or send me an email either through this site or at jackexumjr@yahoo.com. WE WANT TO SELL THIS HOUSE! 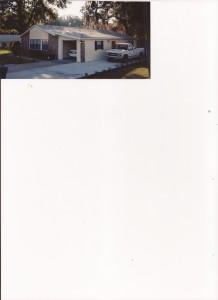 Restoring New Testament Christianity has never been an easy thing. Sometimes we have to take an honest look at where we are, to see where we need to go….

Dad was resting in a Motel in a Metropolitan city where he was holding a meeting and was looking through the Yellow Pages for “Churches of Christ.” He was just wondering I guess, how many were there etc… He also noticed how several indicated what made them different from other “Churches of Christ.”
I guess it was interesting to him to find that there were those that indicated they were Anti-Kitchens, One Cup, Instrumental, Non-Instrumental, etc… In his lesson on UNITY I found some notes he wrote entitled “Yellow Pages.” His idea was what if we put the following in the YP for everyone to see.

1. No located preacher
2. We use buses
3. We have Bible classes
4. No kitchens here
5. We support (Christian) orphan’s homes
6. “Singles” welcome
7. “Divorced” not welcome
8. We eat in the building
9. We use ONE CUP
10. No Sunday School here
11. We send missionary support directly to missionaries
12. We do not believe in church co-operation
13. We don’t co-operate with other congregations.
14. “Whites Only”
15. We support Herald of Truth”
16. All races welcome
17. No money given to non-members
18. We are anti-bussing
19. We have a located preacher
20. We sign pledge cards
21. We are against Crossroads
22. We have a church softball team
23. We use instruments (Instrumental)
24. We don’t use instruments (Non-Instrumental)

To be honest with you, if I found a list of Churches with things like this in the Y.P., I would be pretty embarrassed, but then I am not the One we serve or seek to please. Actually, there are some congregations with a few items listed above.

JESUS prayed, “My prayer is not for them alone. I pray also for those who will believe in me through their message, 21 that all of them may be one, Father, just as you are in me and I am in you. May they also be in us so that the world may believe that you have sent me. 22 I have given them the glory that you gave me, that they may be one as we are one — 23 I in them and you in me—so that they may be brought to complete unity. Then the world will know that you sent me and have loved them even as you have loved me” (John 17:20-23).

I think Charles Hodge put it best, in a short letter he wrote me, where he responded to my inquiry on how to deal with “Church issues.” Of course it doesn’t take him long to say what’s on his mind… He said,

“My most often piece of advice is GROW UP!”.

His advice sounds a bit hard, but then Charles is in his 80’s and has seen a lot and counseled many brethren. Honestly, we need his advice. My thoughts are that if the body of Christ on earth (all baptized believers irregardless of the list above) is ever to find UNITY, we have a lot of “growing up in Christ” to do. Being a Christ-like-one means growing in grace… Growing in grace means we will learn how to deal with differences, let God be the Judge on many things instead of dividing over everything, and present to the world, we ARE ONE IN THE SPIRIT AND LOVE EACH OTHER DEEPLY.

Preacher: When you get up to speak before the people of God, and you are offering your opinion on something, why not just say, “This is my opinion.” “You don’t have to agree with me on this.” It may just be refreshing.
Also, when teaching a class, have the class (or congregation) repeat this phrase
“I just don’t agree with you on that.” Of course you may have to repeat this to get participation. Then you may say (if there are late-comers), that they may be tempted to go look at the sign outside, because we just don’t allow disagreements do we?

(This was first issued in “Restoration Summit 2015” a discussion now going on at Linkedin.com (Groups).

* Some do not like the word “tradition” or “traditional” because they are wanting to just get rid of all the “old ways” of doing things. This is extreme thinking, and is not helpful to the idea of RESTORING New Testament Christianity.
* Some TOTALLY OPPOSE any and all change of anything whatsoever… whether it is Bible based or not… This is also an extreme and not helpful in restoring New Testament Christianity.

To this scribe, “traditions” are simply things done which may or may not be helpful, over a long period of time. In other words, things passed down from one generation to another. For example: Growing up, we often received “hand-me-down” clothing. Frankly I did not want to wear some of the “second hand” or “hand-me-downs, while others were not so bad. Some “hand-me-downs” we HAD A CHOICE in wearing, while others, Mom or Dad said, “Wear it!” There was NO CHOICE IN THE MATTER. Some “traditions” are optional, while others carry the weight of being commands which have been passed down. Restoring New Testament Christianity should never be a “trow out all traditions” proposition…

Scriptures on “traditions.” 1 Corinthians 11:2 “Now here he says, “I praise you that ye remember me in all things, and hold fast the TRADITIONS, even as I delivered them to you.” 2 Thessalonians 2:15 “So then, brethren, stand fast, and hold the TRADITIONS which ye were taught, whether by word, or by epistle of ours.” Galatians 1:14 “and I advanced in the Jews’ religion beyond many of mine own age among my countrymen, being more exceedingly zealous for the TRADITIONS of my fathers.”

Notes from Dad:
1944 we attended the Old Bowling Green Church. It was the advent of paved roads and Autos, lighting, Sunday PM services, Sunday school classes. A partition was used for classes, and uninspired literature was used in Bible studies (Gospel Advocate), printed on a single card with a lesson, picture and prayer. We took turns with who would take the class. We built class rooms, and started Wednesday PM class (formerly dedicated to prayer).
For the communion we used two glasses. Contributions were individually brought to the communion table (without a prayer). Servers were called from the floor. Memorized prayers were offered, with little variation. Women had long hair and wore hats. Song leaders began waving their hands while leading songs, (we thought they were showing off). Most song leaders just kept beat by tapping their feet.
(It’s amazing how quickly, each modified pattern (tradition) quickly became an obligation on everyone on threat of HELL or the loss of some “stars” in our crowns.)
Our meeting house had no sign. We had an inflexible pattern of procedure. (Three songs – prayer – song – sermon – invitation – communion – collection – song – dismissal – covering of communion emblems.) The song leader never offered any comments. There were no scripture readings or communion comments made.
There was no “placing membership (letter)” We had an outdoor “outhouse.” Baptisms were in a lake. Then we moved everything indoors (for convenience, and to keep up with the times) and we also added a water fountain and a kitchen. (Kitchen’s were considered a mark of being liberal or promoting a “social gospel.”) Frequently we used chalk boards and charts. Every Fifth Sunday, we had an offering for Orphan Homes. Once a year we loaded a truck with canned goods for the Orphan’s Home.
Back in those days, we had not yet picked up on the Roman Catholic concept of “Church weddings,” and thus under the responsibility of “the church” to determine who was and who was not eligible to be married.
There were no funeral homes. The body of the deceased was prepared for burial in the home. Some sat with the body. There was singing at the graveside. All singing at the funeral was congregational.
Brethren… The reason for jeans being altered, new shoes being bought is because the physical body is a living, growing body.
EACH CHANGE WAS MET WITH CRITICISM AND DEBATE… and resulted in brethren who identified themselves as:
1.) Non-Bible School, 2.) Non-Building, 3.) One Cup, 4.) Non-women teaching, 5.) Non-kitchen, 6.) Non-Orphan Home, 7.) Non-Located preachers,

Today we find CHURCH STAFFS composed of Senior ministers, Pulpit Ministers, Educational Ministers, Counselors, Secretaries, Custodians, Full time elders, Preacher schools.
Other changes: Overhead projectors, bulletins (mailed or emailed to everyone), Literature (by men and women), Worship teams, Raising hands in praise, contemporary songs, dramas, some have instruments or use online videos, dramas, and puppets, Radio, TV, Internet being used, Applause, etc… Here are some PILLARS (Principles) Dad mentions….
* “Methods are many – Principles are few – Methods often change, but principles never do!”
1. “We have the freedom to give up our rights. We do not have the right to give up our freedom (in Christ).
2. Everyman can have his say, but everyman does not get to have his way.
3. A strong man can become weak, but it takes time for a weak man to become strong.
4. “Traditions are the living faith of the dead. Traditionalism is the dead faith of the living.”
5. Brethren can differ! Romans 14.
6. Personal convictions and opinions CAN NEVER BE ALLOWED TO BE CONGREGATIONAL LAW.
7. Stumbling blocks are not grumbling blocks
8. Respect each others convictions.
9. Understand the difference between the WEAK CHRISTIAN and the HARD HEADED CHRISTIAN.
I encourage all to come and join the RESTORATION SUMMIT 2015 – ON LINKEDIN.COM.