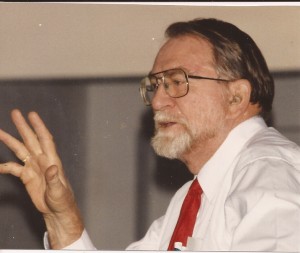 Dad passed on some valuable principles which still “live on” at least in my life. One of them was “Finish what you start.” Always active, always organized with a rotating list of ten things he needed to do, both for the day and the week, Dad plowed through each one until it was done. This is how he kept things from piling up on him. His ministry, his books, his writing articles, his paying bills, taking care of stuff around the house, taking care of medical appointments, projects big and small… all had a spot on his list and a time for getting it done.
The Bible says regarding the work of God in creation, “Thus the heavens and the earth were FINISHED, and all the host of them. And on the seventh day God FINISHED his work that he had done, and he rested on the seventh day from all his work that he had done. So God blessed the seventh day and made it holy, because on it God rested from all his work that he had done in creation (Genesis 2:1-3) (ESV) (Emphasis mine). He finished what He started!
In Genesis 6:16 God instructed Noah, “A light shalt thou make to the ark, and to a cubit shalt thou FINISH it upward; and the door of the ark shalt thou set in the side thereof; with lower, second, and third stories shalt thou make it. (ASV)(Emphasis mine). Genesis 7:5 says, “And Noah did all that the LORD had commanded him.” He finished the job given him.
In John 17:4 Jesus says, “I glorified you on earth, having ACCOMPLISHED the work that you gave me to do” (ESV)(Emphasis mine). His mission of selecting, training, protecting, preparing his disciples to carry on after His death and resurrection, WAS DONE. He finished what He started.
Jesus said in Luke 13:32 “And he said to them, “Go and tell that fox, ‘Behold, I cast out demons and perform cures today and tomorrow, and the third day I finish my course.”  In John 19:30 it says, “When Jesus had received the sour wine, he said, “It is FINISHED,” and he bowed his head and gave up his spirit. (ESV)(Emphasis mine). The third day He rose from the dead… HE FINISHED WHAT HE STARTED.
Several times Jesus spoke about being his disciple and what this involved… In Luke 14, He speaks about counting the cost. (Something very important in considering a project.) He says, “For which of you, desiring to build a tower, does not first sit down and count the cost, whether he has enough to COMPLETE it? 29 Otherwise, when he has laid a foundation and is not able to FINISH, all who see it begin to mock him, 30 saying, ‘This man began to build and was not able to FINISH.’ 31 Or what king, going out to encounter another king in war, will not sit down first and deliberate whether he is able with ten thousand to meet him who comes against him with twenty thousand? 32 And if not, while the other is yet a great way off, he sends a delegation and asks for terms of peace. 33 So therefore, any one of you who does not renounce all that he has cannot be my disciple.” (ESV)(Emphasis mine).
Paul speaks to the brethren about their purposed giving, in 2 Corinthians 8:11 he says, “So now FINISH doing it as well, so that your readiness in desiring it may be matched by your completing it out of what you have” (ESV)(Emphasis mine).
He says to young Timothy, “I have fought the good fight, I have FINISHED the race, I have kept the faith” (2 Timothy 4:7) (ESV)(Emphasis mine).
“Finish what you start!” Make a list of what needs done. Take each one and count to cost, and begin… but keep on until it is done. Do the same with everything, no matter how small or large the job. Break big jobs down into daily or weekly increments… A mission may even take a life time, but FINISH IT.
Grow in grace brethren….