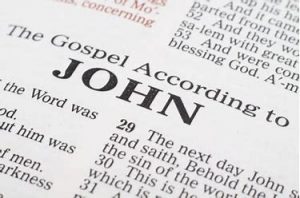 Text: John 1:6-7, 15, 19-36
(and other passages)
* No disrespect to John, but I would be a bit nervous about meeting this guy (Rough wilderness life! Lived off the land, dressed/Camel’s hair! Definitely not politically correct!)

Gathering some FACTS and THOUGHTS

Applications: John, BOLD and HUMBLE
* What are some lessons we learn from how John carried out his mission which we can apply to ourselves?
* How was John’s humility seen, and what can we learn about true humility from John?
* What should we expect when reach people for Jesus? How should we respond?

John begins with four distinct pictures of Christ:
1. In relation to Deity – He is God: 1:1; Hebrews 1:1-4
JW teachings = ancient Gnosticism resurrected 1.) Jesus = NOT God but is first creation of God (thus a lesser god) thru whom God created the physical (evil) universe. Their New World Translation Bible reads, “… and the Word was a god.” 2.) Jesus was not physically resurrected. (For other differences Google and Compare: “Five Beliefs That Set
Jehovah’s Witnesses Apart From Other Christians.”)
Why is it important that John teaches Jesus = The Word/ is God?

John 1:14,16-18; I John 1:1ff Read
This is the heart of John’s Gospel.
“Grace” = Embodiment of grace. (How he deals with the lost.)
“Truth” = Embodiment/ Communicator of/ truth which makes people free.
In a world where Pilate’s question, “What is truth?” why is Jesus so important?
What is the significance of “Law/Moses” and “grace/truth by Jesus”?
(Read Barclay’s Commentary John Volume 1, page 54 at top.)