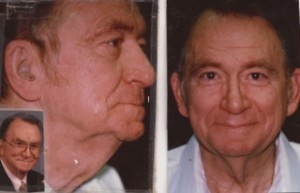 Dad always had a great smile, and always enjoyed hugging. He was a happy guy… confident in God’s grace and salvation… Yet his self image wasn’t always that great he said. When things began sagging, as things do with old age… he finally decided to do something about it. He got the names of the nurses and doctors who would be working on him, got the costs, and made the plan to take the time off needed for surgery and recovery, March 1- April 7, 1988. Mom and Dad made the journey to Bearwood Plastic and Reconstructive Surgery Ctr in Anderson, SC… and got it done. He was very satisfied with the results…

Sometimes we just need to do something with our face. “It is said that Abraham Lincoln, when he was President of the U.S., was advised to include a certain man in his cabinet. When he refused he was asked why he would not accept him. “I don’t like his face,” the President replied. “But the poor man isn’t responsible for his face,” responded his advocate. “Every man over forty is responsible for his face” countered Lincoln” (Resource, July/August, 1960).

Not everyone has the money for a face-lift. Face-lifts are not always the answer to a person who has more scars on the inside than on the outside. There is a cheap face lift however that all can put into practice… smile.

Dad quoted a little poem…
“I know my face ain’t no star,
But I don’t mind it, for I’m behind it,
The one’s in front get the jar.” (Author unknown)

Sin takes away the smile and joy of life. King David experienced a terrible time in his life where he was at the wrong place, at the wrong time, and looked at the wrong woman too long. 2 Samuel 11-12 records the story if you wish to read. Everyone knows he committed adultery physically with her and had her husband murdered on the “front line,” to try and cover it up… Few people pay attention to the fact that this took place in his heart before it took place physically.

Jesus said, 27 “You have heard that it was said, You shall not commit adultery.’ 28 But I tell you that anyone who looks at a woman lustfully has already committed adultery with her in his heart” (Matthew 5:27-28). Then he follows this with talking about cutting out an eye if it is going to cause one to get to hell. The idea of course is controlling OUR THOUGHT PROCESS. According to Jesus, there is not much difference in adultery dreamed of and adultery done. With David, with all whose face reflect the pain of a life of sin… much could have been avoided with just controlling the THOUGHTS, for it begins and takes place in the heart first!

Then came Nathan, and with his little parable, he cut to the heart of David, who when convicted… humbled himself and asked for forgiveness… He received it. Grace and forgiveness provided a “face-lift” for David, bringing back the “joy of his salvation.”

There is just so much a face-lift can do… It will not give a person a new heart. It may take years off ones looks, but it won’t add joy to a sinful, broken heart… ONLY GOD’S GRACE CAN DO THAT. Take a moment to read Psalm 51 (David’s broken heart and contrite plea for forgiveness.) Then read Psalm 32 (David rejoices in forgiveness.)

Today, we have a hard time with grace and forgiveness… and the older brother did too. Reading Luke 15:11-32, the parable of the prodigal (wasteful son), I get the feeling the the older brother did not want the father to extend grace and forgiveness to the younger brother. “It’s just NOT FAIR!” “He needs to PAY FOR WHAT HE DID!” “He not only SPENT AND ENJOYED SPENDING his inheritance… but now HE GETS TO COME HOME AND get a RING, A ROBE, AND SHOES, AND (this just cooked his bacon) A FATTENED CALF FOR A FEAST!”

David did pay with a lifetime of heartache. The prodigal… I imagine he did do a bit of kicking himself and wishing he never did what he did. The point is, that grace and forgiveness cannot be earned. There’s not enough goodness in good works to pay the price of “pay-back” for sins done. Grace is bigger than has been portrayed by many pulpits… It cost $7200.00 for Dad to get his face lift… and he had to pay for it. IT COST JESUS paid for OURS with his life on the cross. The results of what doctors can do are truly marvelous.

The results of what Jesus can do in a person’s life is even more remarkable, because it is a change that gets better with time. Physically, the skin will sag again with time. Spiritually, grace gives a song to the lips, a smile to the face, and hope to the heart that cannot be taken away.

Grow in grace! Let Jesus offer of GRACE be heard in our pulpits!

Children are weird in a lot of ways. They are full of emotions, ‘vim and vigor’. They do things they often regret or get embarrassed about. I was no different.
It happened in Sherman, Texas, and I was about ten years old, I had just come home from school. It was a sunny day, and I went into the house, and called out, “Mom, I’m home.” No sound of mom or anyone. It was unusual for me to come home and find no one there. We were still living in the days when a family could live on one income, and be happy.
I went into the kitchen as was my custom, to raid the refrigerator, and hopefully find some Twinkies, or a piece of apple pie. No luck… dad got there first. I was disappointed and so I went back in the den and shut the door. Then I found it… a case of beer. You just cannot imagine what went through my mind.
Now, as dad told me later, when we could laugh about it… Sherman, Texas was in a “dry county”. That means simply, NO ALCOHOLIC BEVERAGES ALLOWED. Dad of course was the preacher for the Church of Christ and was pretty well known, since he was writing books and doing personal work and visiting the hospital regularly.
I was terrified, and thought that dad gone out and bought this case of beer, and had become an alcoholic. Well, I have to confess I went a little crazy. Being the oldest son, a new Christian, and determined to save dad’s reputation, I took this case of beer, all 24 cans, out on the driveway, and a ice pick, ion very plain view of anyone driving by, and started punching holes in each and every one of those cans. Of course since they were warm, and a bit shook up, these cans didn’t ‘go quietly’. They sent beer spewing several feet into the air. One by one they went off like ‘old faithful’. I was covered in the stuff, and the drive way smelled and everyone who passed by couldn’t believe what this ten year old boy was doing much less the smell that was in the air. It’s not over… then mom and dad came home!!!
What does a boy do? Pray!!! Well, in the end, dad had been teaching a man who was destroying his family with drinking and he had convinced him to give up the beer. Dad was going to get rid of it for him. I guess, my motives were the only thing that saved me that day.
It would have been easy for dad to get angry that day. He could have jumped to a wrong conclusion just as I had already. But he was the adult, he had more wisdom, and patience. Me? Well I was just in the middle of growing up. I had (have) a long way to go in learning the truths of the Master teacher. Jesus said to his disciples, “Do not judge lest you be judged. For in what way you judge, you shall be judged; and by what standard of measure, it shall be measured to you. And why do you look at the speck that is in your brother’s eye, but do not notice the log that is in your own eye? Or how can you say to your brother, ‘Let me take the speck out of your eye,’ and behold there is a log in your own eye?” Matt. 7:1-4