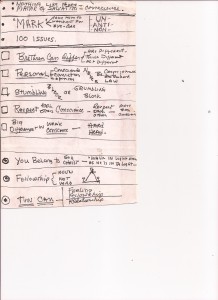 A simple outline Dad put together on UNITY.
We will be publishing several outlines which are connected to this subject. A few thoughts are added for continuity.

* Nothing like peace.
* Matters of salvation/ Conscience (Matters of salvation cannot be changed. They are those things which if denied, remove one from the saving grace of Jesus… Matters of conscience on the other hand, are those thing in which there can be differences. Differing on them will not separate one from the saving grace of Jesus.
———————————————–
* MARK -Take note of – Watch out for – Eye ball. (The meaning of “mark” cf. Romans 16:17;  Phil. 3:17). “Mark” (take note of/watch out for) those who are divisive, (destroy the unity of the body). “Mark” (take note of/watch out for) those who follow the example of Paul. So here we have a negative and a positive. Both are meant to protect and build unity.
(Un) scriptural…(Anti) scriptural….(Non) scriptural…. Learn the difference between these and you will go far in maintaining unity. Many things need not to be argued over. Agreeing to disagree at times is okay.
* 100 ISSUES (See how many issues you can list.)
———————————————–
1. Brethren can differ (Are different )(Think different)(Act different)
2. Personal (Conscience-Conviction-Opinion can NEVER be congregational law.
3. Stumbling block or grumbling block. (Taken from Romans 14-15… Learn the difference between the “stumbling block” and the “grumbling block.”
4. Respect each others conscience (Respect each other more than conscience.)
5. Big difference between – WEAK conscience and HARD head.
———————————————–
* You belong to God/Christ (“walk in the light as He is in light”)
* Fellowship is a NOUN not a VERB. (Illustration of triangle – As you and I get closer to God, we get closer to each other.)
* Tin can (Words matter)  Feeling/Fellowship/Relationship many times are destroyed over WORDS! (Go out and shoot your own can… Carry it, use it, teach lessons with it, but more than anything, keep it on your desk and when tempted to “blast” some brother or sister in Christ… remember, you cannot undo or repair the damage…… ever!

————————————————-
There’s the outline… As you can tell, Dad had most of his lesson in his mind and heart. Key words and thoughts and illustrations just kept him moving.